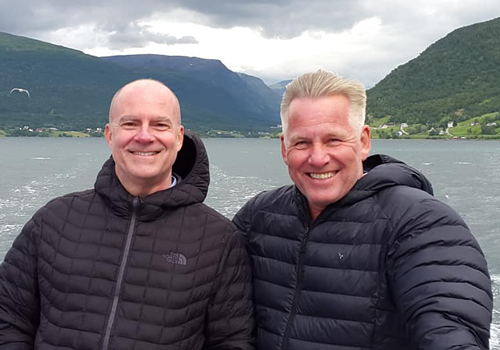 After two years at a local college in his native Oklahoma, Eric Ramirez-Ferrero ’85 knew he wanted to travel east to continue his education.

“The description of Bennington, which really emphasized taking responsibility for the design of one’s own education, both drew me in and scared me,” recalls Eric. “I asked my Shakespeare professor if he had heard of Bennington. He said, ‘You have to go there. That place is you.’”

At Bennington Eric focused his studies on anthropology and biology, but also studied Spanish literature and piano at the advanced level. He fondly recalls his individual tutorials in anthropology, and walking through the woods with anthropology teacher Joanna Kirkpatrick talking about Claude Levi Strauss, Clifford Geertz, and Emile Durkheim.

“From Joanna, I learned about medical anthropology, which set my mind on fire,” says Eric. “It was like a lightning bolt. From that moment I knew that I would have a career in international health.”

After graduating from Bennington, Eric obtained his PhD in anthropology at Stanford University and later received a Master of Public Health degree from Johns Hopkins University. He began his career in public health in Oklahoma where he focused on improving access to health care in rural areas. He then went to work as a University of Michigan Population Fellow, serving as a senior technical advisor and project director for sexual and reproductive health initiatives in Tanzania.

Eric’s work kept him traveling abroad for 15 years, taking him to Africa, Europe, and Afghanistan, where he had to dress as a member of the Taliban to gain access to midwifery schools. He now serves as Technical Director to USAID’s global flagship family planning project.

For Eric, the Bennington experience was intellectually and personally formative, and he always knew that the College would be a beneficiary of his estate.

“But the current confluence of crises—the global pandemic, the economic tailspin, the calls for racial justice, our crisis of democracy—focused my mind and motivated me to do estate planning for the first time,” says Eric. “I see Bennington as a vital American institution. Making Bennington the primary beneficiary of my estate was my way of responding to these concerns.”